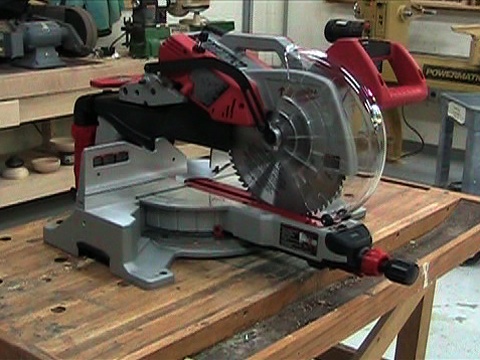 ​10 Inch vs 12 Inch Miter Saw – probably one of the first questions you’ll have to tackle when purchasing a new miter saw.

​What size miter saw will you need ?

​A new miter saw is a pretty serious purchase for most woodworkers especially if you have never owned one before.

With 10 inch saws running at a significant discount to some of the high end 12 inch miters, price is usually one of the biggest factors that lead people in their decision.

Bear in mind that there are some smaller and larger saws available from 8-1/2 inch all the way up to 15 inch, however the 10 and 12 inch saws are the most suitable for the majority of people.

​Everyone will have different needs when it comes to what kind of miter they will need. Are you a beginner just about to purchase their first saw or an experienced woodworker that has lots of projects on the go?

​Although it is the most obvious thing it is not only the size of the blade that separates the two. Below you find a brief summary of each type and their strengths and weaknesses.

​Usually the first choice for those that are starting out the 10 inch miter will have the following attributes:

The smaller blades are usually much easier to find in your local hardware store. Not only do they have much better availability they are also usually a lot cheaper.

Depending on the brand a 10″ blade can be almost half the price of a similar 12″. If you have a lot of projects and use your saw quite a lot this can mean a significant saving on on-going replacement blades.

If you prefer to have your blades sharpened a few times before retiring them the 10″ ones are also a lot cheaper to have them re-sharpened.

Smaller blades spin faster when used with the same motor. For example through out the DeWalt Miter Saw range the smaller DW717 10″ saw will spin at 5,000 RPM versus the larger DWS779 at 3,800 RPM even though both saws have a 15 Amp motor.

A faster blade will generally give much finer and more accurate cuts than a larger one. Given the smaller radius of the 10″ blade it is less likely to wobble at maximum RPM.

The major drawback of course of a 10″ miter is the reduced cutting capacity when compared to a 12″ saw.

​12″ miters are have a number of clear advantages over the smaller 10″.

Firstly the cutting capacity is usually much larger, thanks in part to a much longer swing arm.

There are also capable of a much higher overall work rate than the smaller 10″. 12″ saws are built a lot heavier and usually the components can withstand a lot more abuse and heavy daily usage than the smaller saws.

​The biggest negative point to the larger saws is of course the cost. They are generally a lot more expensive to both buy and fix if something goes wrong.

As outlined above blades are also more expensive to replace and to have sharpened.

The larger saws are also a lot heavier and bulky. This really isn’t an issue if your saw is permanently mounted on your work bench. However, if you are moving it around a lot from job site to job site then it can be an issue.

Purchasing a good miter saw stand can make life a lot easier but does add to your overall expenses.

​Which One Do You Choose?

​Ultimately the choice between a 10 or 12 inch miter saw will depend on your exact situation.

If you are a beginner purchasing their first saw and don’t need a larger cutting capacity then the 10″ saw is a good option.

However if you work as a busy carpenter on site and need a powerful saw that has a large cutting capacity that can slice through crown molding all day long then the 12″ saw is the one to get.