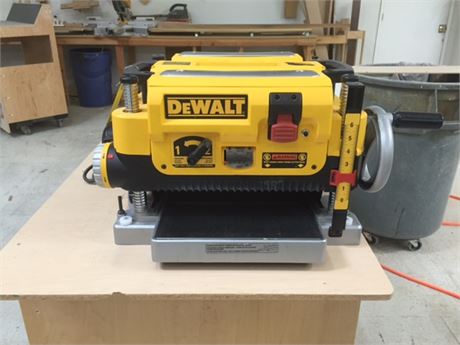 ​Investing in a good wood planer can save you thousands in lumber over the years. A planer gives you the ability to not only smooth out cheaper lengths of wood but to also recondition older more expensive cuts that otherwise might be thrown away.

A bench top planner has the added advantage of not taking up to much room in a workshop but they are also easily transported around to different job sites.

DeWalt are easily the most popular brand of bench top planers and with three similar models to choose from it can be a little confusing especially with the model numbers being so similar.

​Below​ you’ll find a quick summary of the features and differences between the DeWalt DW734, DW735 and DW735X.

The majority of the differences are between the DW734 and DW735. The DW735X is the same as the DW735 but t include the feed tables and an extra set of cutter head knives.

​Across the three models the major differences are between the DW734 and the DW735.

​Although they are of similar power it is the carriage lock, cutting ability and knife size where the differ.

Both models are powered by a 15 Amp motor. That motor spins up to a maximum speed of 20,000 RPM. At the cutter head however this translates into 10,000 RPM.

The 2:1 reduction from motor to cutter head helps to increase the torque available to the blade giving it a better cutting ability especially on harder woods.

The DW735 is a two speed planer. Having the choice between a low and high speed gives you the option to tailor the cutter head to the type of finish that you want on a specific variety of wood.

The DW735 has a 13 inch knife head and also uses the disposable knives. The knife heads are reversible and DeWalt claim that they will generally last about 30% longer than other brands.

​A carriage lock along with properly set up infeed/outfeed tables is what helps ensure that you minimize the amount of snipe on the boards that you cut.

Both the DW734 and DW735 have a carriage lock but one is manual and the other is automatic, each has their advantages and disadvantages.

​On the DW734 the carriage lock is manual. A manual carriage lock allows you to have better control over the locking mechanism, the disadvantage is that it is an extra manual setup step for every board.

The DW735 has an automatic carriage lock. Although this means you don’t have the same fine grained control over the lock it does eliminate an extra manual step which can be a real time saver if you are planing lots of boards.

The DW734 comes with a set of infeed and out feed tables the DW735 does not. With the DW735X however you do get the tables included.

Although not a huge issue there is a difference in the weight between the planers. The DW734 is the lighter model as you would expect weighing in at 80 pounds and the DW735 comes in at 12 pounds heavier at 92 pounds.

The two models only differ by what is included in the box and the price of course. The X in the DW735X stands for eXtra’s.

With the DW735X you get the infeed and outfeed table and an extra set of blades.

Although you can operate the DW735 with out the feed tables it will increase the risk of snipe along you boards especially for longer boards which will tend to bend easier than shorter ones.

At the lower speed you will get 96 cuts per inch and the higher 179 per inch.

As stated above you get the addition of the feed tables in the ‘X’ package along with an extra set of blades.

It has a maximum height clearance of 6 inches and a width of 13 inches. The cutting depth per run of the boards is 1/8 of an inch.

The DW735 is the exact same planer as the X variation without the feed tables and the extra cutter.

If you are on a strict budget and can set you planer up with custom made feed tables then it is definitely a good option.

​The D​W734 is the older, smaller and lighter brother to the DW735 model. It has a manual carriage lock and has is a single speed bench top planer.

The infeed and outfeed tables are included in the box. On earlier versions the knife cutting heads could be re-sharpened however, on newer models the have the same disposable ones as the DW735.