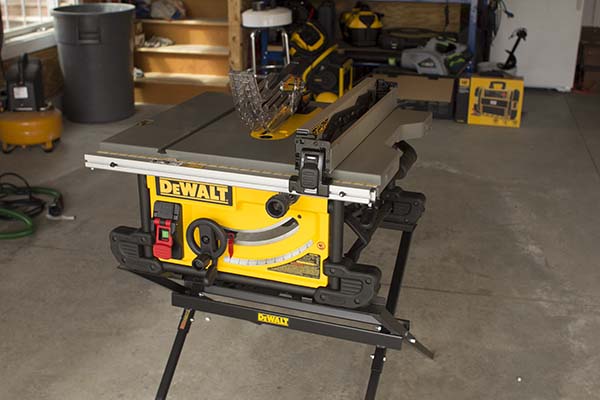 ​Choosing a new table saw ain’t easy! Big brand like DeWalt have lots of offerings and all the similar model numbers can get a little confusing.

The DW745 and DWE7480 do not come with stands and are intended to be used in the same location. They can of course be mounted to a rolling stand to covert them into a more versatile job site table saw.

The DWE7499GD and DWE7491RS come with stands included. You can choose either a rolling stand or the more traditional folding legged only. They are what is commonly referred to a job site table saws i.e intended to be used on building sites and can handle large sheets of stock

Performance wise between both sets of saws it is pretty similar. However the job site saws have a much bigger rip capacity of 32-1/2″ versus the other two which are in the low 20″s.

​​To help give you a clearer picture of the full model range we have compared each set of tables saws separately below with a comparison table included for each.

​The difference between the DW745 and the DWE7480 are in the rip capacity and in the motor speed.

The DWE7480 has a larger rip capacity of 24-1/2″ than the DW745’s 20″ on the standard models, you can upgrade to larger rips but that comes as an added expense. As ever that measurement is when you are cutting to the right of the blade.

Generally the higher the blade speed the more accurate and cleaner the cut. So, if you are the kind of woodworker that needs to make finer more accurate cuts for furniture then the DWE7480 is the clearer choice.

​From looking at the above table it is clear that they are pretty similar job site table saws.

Feature wise the major difference between the DWE7499DG and DWE7491RS is the safety features found in both saws.

The DWE7499DG has what is called “Guard Detect”. This simply disables the saw if the blade guard has been removed. It can be over-ridden at the flick of a switch.

On the DWE7491RS there is a plastic cover on the switch to stop accidental power ons. If the saw loses power during operation it will not start once power is restored. You have to switch the saw to the off position and then back to the on position in order for it to work.

It comes with a 24 tooth Carbide blade. The blade protection uses a pretty standard anti-kickback feature and tool-less blade guard.

You can hook your shop vacuum up to the DWW7480 using a 2-1/2 inch dust port helping to keep your workspace that little bit cleaner.

​The D​W745 is the older model to the DWE7480. It has an older specification motor that gives a slightly lower top speed of 3,800 RPM.

​The maximum rip capacity is also smaller and comes in at 4-1/2 inches ​shorter than the DWE7480 at 20 inches even.

You get the same rack and pinion fence lock, cutting depth and 24 tooth blade.

It comes with a rolling stand that has four sturdy legs that can be folded up during transport. The wheels used are quite large making navigating steps and cluttered building sites that little bit easier.

It is possible to bypass this feature using a bypass switch. This feature is the only major difference between this saw and the older model above.

The price is also much more expensive and realistically you should not have to pay so much extra for a blade guard system.