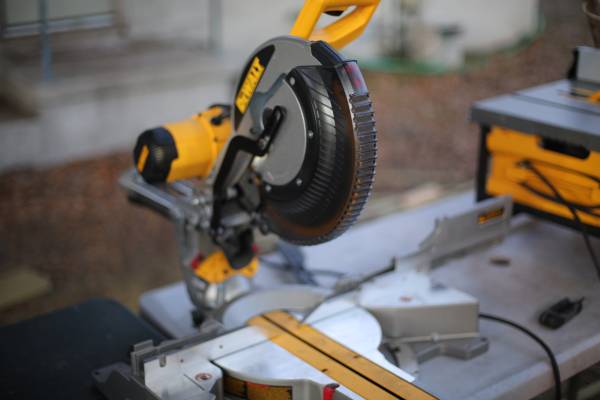 ​DeWalt are easily the most popular miter saw brand on the market they have had quite a few models down through the years and all of which have been top performers for their price point.

Right now it’s top of the range offering is the DWS780.

But should you buy the DWS780, bearing in mind that it is the most expensive?

​The main differences between the DWS779, DWS780 and DWS779 are that the DWS779 and DWS780 are essentially the same saw but the DWS780 comes with DeWalt’s XPS guide system and is also roughly 50% more expensive than the DWS779.

The DWS709 is a much older model miter saw than the DWS779 and DWS780. If has a smaller rip capacity than the others two and is roughly the same price as the DWS779 depending on where you buy.

​Below we have listed the specifications of each model and a comparison table. Ultimately your decision as to which one you should buy will depend on your usage needs.

Difference between the DeWalt DWS779 and DWS780

​Most buyers will probably have already whittled their decision down to between the DWS779 vs DWS780.

The DWS709 is rather lacking in it’s cutting capacity despite still sharing a lot of other common specifications and features with the two newer models.

​So ultimately you need to understand how the DWS780 and DWS779 compare to each other.

The DWS780 is essentially and upgraded DWS779. That upgrade comes by way of DeWalt’s new XPS guide system.

The DWS709 and DWS779 and virtually all other miter saws you’ll see from top brands use what is called a laser guide system.

​A laser guide shines a laser in line with the miter saw blade to help you determine where the blade will make it’s cut on your piece of wood.

​The only disadvantage with using a laser guide system on a miter saw is that when you change the blade it can sometimes affect the alignment of the laser which will throw out the accuracy of your cuts.

If you are using you saw a lot like on a job site or in a busy woodworking shop then this may become more of an issue than for a regular home user that may only use their saw occasionally.

​The DWS780 uses DeWalt’s newer XPS system. The XPS shines a bright LED down the length of the blade. Because the light is projected as close along the blade as possible it ends up casting a shadow where the tip of the blade is.

This results in one of the most accurate alignments by sight that you can have. One of the other advantages is that because the LED is cast along the blade even if you change the blade you will not need to re-calibrate the shadow as it is formed by the new blade.

​The DWS779 offers a great trade off between cutting performance and power and afford-ability.

​It is a double bevel 12 inch sliding compound miter saw. It’s 15 Amp motor is capable of achieving a maximum no-load speed of 3,800 RPM.

The DWS779 can make miter cuts in a range from 50 degrees left through to 60 degrees right.

Being a double bevel saw it’s bevel angle runs in a range of 49 degrees in both left and right directions. There are positive bevel stops at the most commonly used angles of 0, 22.5, 33.9, 45 and at 49 degrees.

​Weighing in at roughly 56 pounds it is a pretty sturdy saw. Once mounted to your work bench or on a stand the quality and smoothness of operation becomes apparent.

​There are no cheap plastic parts used on any of the elements. The majority of the saw is constructed from precision cast parts that are finished to very fine tolerances. The de-dent plate of the miter is actually stainless steel which is a lot more robust than you will find on some cheaper brands.

​How to Secure a DeWalt Miter Saw

​With any of the miter saws listed above you will generally have two different means of providing a solid base from which you can safely use it:

Which option you choose will usually be defined by where you will most commonly be using you miter saw.

If you are always going to use the saw in your workshop or garage then the best way to both store and use the saw is to mount it permanently to a strong, stable and level workbench.

The workbench needs to have sufficient room behind it to clear the back of miter saw arm. Before you mount it you should move the saw through it’s full range of motion before it is connected to the power.

Make sure that you can freely and accurately use all of the features of the saw and that it is at the right height. You don’t want it too low so that you are bending over to use it and not too high so that you can easily reach the main handle.

If you are going to be using your miter saw on lots of different job sites then investing in a quality miter saw stand really is the only way to ensure that it is both easy and safe to use.

DeWalt have two different stands available to fit the above saws the DWX723 and the DWX724.

Of the two the DWX723 can hold slightly larger lengths of timber than the DWX724.

​It can hold up to 500 pounds in weight and is capable of supporting timber up to 16 feet long. ​Standing 32 inches tall and weighing in at about 5 pounds it is a pretty mobile miter saw stand. With folding legs it can be easily stored when not in use.

There is also a rolling version called the DWX726.