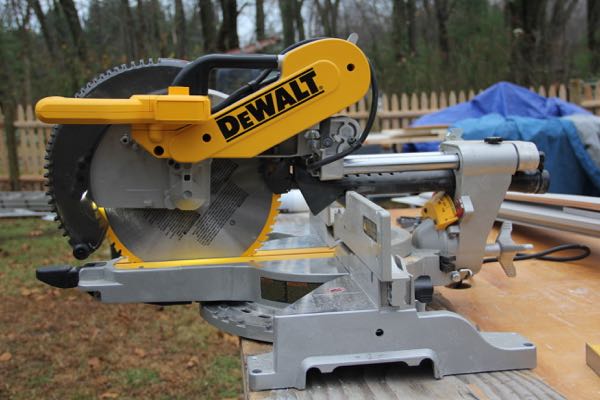 ​DeWalt vs Hitachi miter saw – two of the most popular miter brands in use today.

​At the mid range of the miter saw market is generally where you will find the best trade off between price and quality.

​At the higher end of the market, although manufactured to an extremely high standard brands like Festool are usually 3 times the price of the offerings from the more popular mid range brands such as DeWalt and Hitachi.

Both brands have offerings in the 10 and 12 inch categories.

Usually the first thing to consider when buying a new miter saw is just how big a blade will you need. The larger 12 inch miters are always going to be a lot more flexible than the smaller 10 inch.

Personally I have always owned a 12 inch saw. The 10 inch however does have it’s uses, they ​are generally better at making cleaner cuts than the larger 12 inch.

So if you do a lot of fine woodworking and do not need to cut large more basic pieces such as crown molding then it is best to stick to a 10 inch.

The other thig of note is that a lot of 10 inch miters are only single bevel whereas the majority of 12 inch miter saws are double bevel.

​The average handyman or tradesman working on a busy jobsite will generally favor a 12 inch miter saw. Both Hitachi and DeWalt have multiple offerings in this size.

DeWalt have the DWS779 and DWS780 along with numerous older models and some cordless battery powered offerings too.

Although the DWS780 is the top of the line model from DeWalt I feel that the DWS779 is actually better value as it is commonly up to 50% cheaper than the DWS780 the only difference being the guide system.

Hitachi have the C12RSH and C12RSH2. Although you will commonly see the C12RSH on sale online and in many department stores it is important to realize that it is a discontinued model.

Not only that it has a much more solid feel to it especially under a heavy load when cutting harder wood varieties.

The Hitachi miter saw does however come with a 5 year limited warranty versus the DeWalt’s 3 year.

If you are limited on space in your wood shop then the Hitachi has a big advantage over lots of other miter saws in that it’s slide rail eliminates the need for rear clearance.

​Easily the best miter saw for the money the DWS779 has bags of power and cutting ability. It can hit a no-load speed of 3800 RPM thanks to it’s 15 Amp motor.

​The configuration is a double bevel sliding miter saw with a 12 inch blade. It has a miter range of 50 degrees from the let through to 60 degrees to the right.

With double bevel capability it has a full bevel range of 49 degrees from left to right.

The DWS779 uses a more traditional laser guide system than the top of the range DWS780. The DWS780 is priced significantly higher than the 779 and that price increase is really only for the addition of the XPS guide system that the 780 uses.

The DWS779 is also backed by DeWalt’s 3 year limited warranty.

​The C12RSH2 runs at a maximum no-load speed of 3,800 RPM just like the DeWalt. The speed is pretty much standard for a 12 inch blade.

​Probably the C12RSH2’s best feature is the sliding rail system. Traditionally the slide rail systems on miter saw will end up requiring a lot of rear clearance for the saw head to move through it’s full range.

​Hitachi have designed a slide rail that requires zero rear clearance, saving you space on your workbench.

It is effectively a single bevel miter saw as you only get between 0 and 3 degrees bevel to the right with a full 0 to 48 degrees to the left.

The miter range runs from 50 left through to 50 degrees to the right. There are 11 positive detents at the most popular angles. The detents can be over-ridden for finer adjustments.

​Just like the larger C12RSH2 the C10FsHC also features the same zero clearance slide rail system, so you can fit the saw flush up against a wall or on your bench top without being too restricted by the depth of the saw.

With a 10 inch blade and a 15 Amp motor we would really expect the maximum no-load speed to be significantly more than the quoted 3,200 RPM.