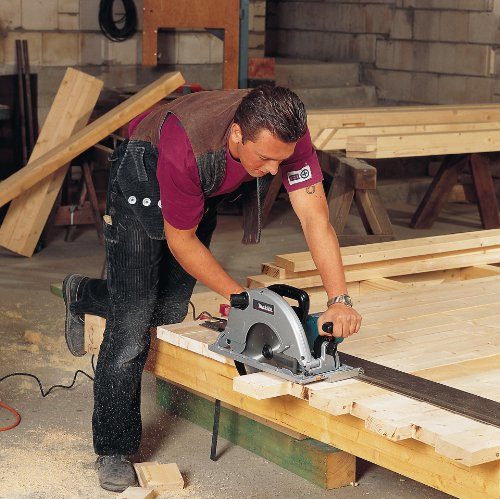 ​Miter Saw vs Circular Saw which saw is right for your power tool collection and do you really need both?

​Although most experienced woodworkers and DIY enthusiasts can get the job done without the need for power tools in their garage, modern reliable powered saws can certainly make your cutting jobs not only faster but also more accurate.

​Both the miter saw and the circular saw ​have their strengths and weaknesses. Below we’ll take a brief look at what exactly each saw is and when to use one over the other.

Which one you choose will ultimately depend on your needs but in short a miter saws are used for cross cutting lumber and crown molding whereas a circular saw is best used for making rip cuts in sheets of wood.

The miter saw is usually one of the biggest purchases you are likely to make. And although you don’t absolutely need one they can make certain jobs a breeze.

A miter saw is basically a spinning saw blade on a fixed arm. The fixed arm can allows the blade to be lower precisely from above allowing you to cut through lumber at a perfect 90 degree angle just like a chop saw.

However a miter saw can make cuts at a variety of different angles.

The “miter” in miter saw allows for the blade to cut across the lumber at different horizontal angles. The miter cut is always made at 90 degree to vertical.

Look at it this way a miter cut is any other angle other than 90 degrees across the width of a piece of wood.

Miters can also be used to make bevel cuts. A bevel cut is when you make a cut at an angle that is 90 degrees along the thickness of the wood.

​Miter saws are commonly used to make quick and accurate cuts across pieces of lumber. They are used most commonly to cut crown molding at the correct angles that allow for a seamless join especially in corner pieces.

One major disadvantage of a miter saw is that the are big and heavy and significantly less versatile than a circular saw.

​The circular saw is a lot more common than the miter saw. They are significantly cheaper to purchase and can be bought in either corded or battery powered(cordless) models.

Although you can make all of the same angled cuts with a circular saw as you can with a miter saw, they will always be less accurate.

What they lack in accuracy however they make up for in versatility.

A circular saw can be used just about anywhere as they are not fixed to a base or work bench like the miter saw.