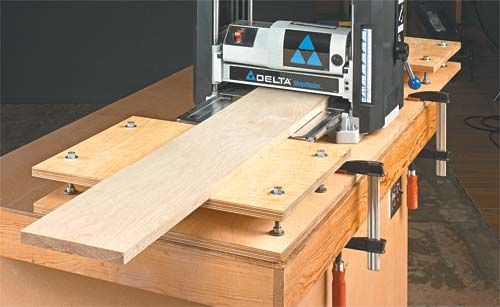 ​Wood planers were traditionally hand tools that were used to flatten or shape wood. They had a removable blade fixed in a wedge that could be pushed along a piece of wood to help flatten and smooth them.

Although still commonly used today for larger jobs hand planers have been replaced by powered planers.

Powered planers are usually referred to as “thickness planers”

These powered planers can be used as either hand held corded power tools or they can be much bigger pieces of equipment like a portable bench top planer or even a more fixed solution such as a stationary cabinet planer.

​What Is A Wood Planer ?

​The primary job of all wood planers regardless of whether they are powered or not is to shape and  smooth out uneven pieces of wood.

This can mean shaping only a small part of the wood to remove a protruding knot or any other blemish. It can also mean cutting the entire top surface of a piece of wood down to certain thickness so that the board is as symmetrical as possible.

Probably the most common type of planer found in a busy woodworking shop or on a building site is a portable bench top planer.

​Planers such as the DeWalt DW734, DW735 and DW735X are used extensively to smooth out rough boards before being used on thousands of job sites across the country.

These types of planers are easy to use and with the addition of in-feed and out-feed tables they can usually be quite good at eliminating snipe.

​How Does A Wood Planer Work ?

​All wood planers work by running a blade along the surface of the wood preferably in the direction of the grain.

A thickness planer works by passing the board underneath a rotating cutter head. Either side of the cutter head are an in-feed roller and an out-feed roller.

​The in-feed roller is used to grip the board and pull it along the underneath the cutter head at a uniform speed.

The cutter head has a number of knives mounted on it. It are these knives that actually cut the surface of the wood as it passes along under the cutter head.

The out-feed rollers are then used to pull the board through out from the cutter head where it gets ejected.

A good thickness planer will generally have both an in-feed and an out-feed table. The longer these tables are generally the less chance there is of producing snipe on the board.

Snipe is when the planer ends up cutting a little bit more out of either the end or the beginning of the board.

Setting The Cutting Depth On A Planer

Once the planer and feed tables are correctly aligned the next task is to set the cutting depth of the cutter head.

Depending on the type of planer that is used you either adjust the planing platform that the boards sit on or you adjust the cutter head depth.

Once the planer has been setup correctly and powered on the boards are fed in on the in-feed table. Be careful to ensure that the board lies as flat as possible on the platform.

One important thing to note that in order for a planer to smooth a side correctly the opposite side that sits on feed tables must already be perfectly smooth and flat.

Depending on the planer that you have the speed at which cutter head spins at can affect what kind of finish you will get on your piece of wood. Generally I tend to favor a two-speed planer as it gives you a lot more versatility when dealing with different varieties of wood.